The electrolysis process for the production of hydrogen, from the decom-position of water into its molecular components hydrogen (H2) and oxygen (O), requires the use of large amounts of electrical power. In particular, “green” hydrogen, produced with regenerative electricity generators, is seen as a hopeful energy source in the exit scenario from fossil fuels sources. Instead of oil and gas, hydrogen-powered fuel cells are to generate electricity and heat for end consumers, both private and commercial, for mobility or for industrial processes.

The operation of the electrolysis process within a so-called electrolyser plant requires a regulated direct current supply. A rectifier system is used to convert the alternating current drawn from the power supply network into direct current. However, the rectified voltage is highly pulsating, which is undesirable for the components used in control and drives technology.

TRAMAG: We are the Enablers

The use of a TRAMAG DC Smoothing Choke at the rectifier output ensures a smoothed current form, i.e. a reduction of the AC residual ripple, in order to avoid damage to the subsequently installed electrical components and to ensure a stable, safe electrolysis process.

High efficiency and high availability of the electrolyser plants for hydrogen production on a large industrial scale are prerequisites for ensuring that investment and operating costs pay off, also with the use of TRAMAG winding goods technology as part of the optimum electrical equipment, and thus enable economic operation.

For years, customers all over the world have been able to trust in our TRAMAG solutions competence in transformers, reactors and filters, both in reliable use for the production of regenerative energy with wind power and photovoltaic plants and for the generation of “green” energy sources such as hydrogen. An important contribution to a CO2-reduced and at the same time strengthened energy industry for the stable supply of “green” electricity.

Are you interested in high-quality transformers and chokes for Hydrogen Production?

Always up to date in transformer technology

Industries & Applications: Hydrogen Production for a “green” Energy Source TRAMAG DC Smoothing Reactors in use for the DC Supply of an Electrolysis Plant for the Production of Hydrogen   The […]

Industries & Applications: Crane Systems TRAMAG Transformers in use for Electrical Control and Safety in Crane Systems A significant part of the worldwide transport of goods takes place in ISO-standardized […]

Industries & Applications: Industrial Power Supply Systems TRAMAG Transformers in use for sustainable Voltage Quality in Factory Power Grids The construction of new, but also the modernization of existing industrial […] 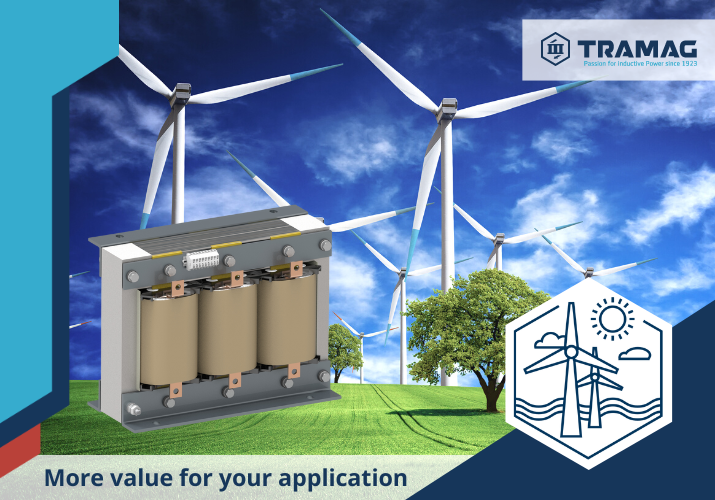